A history of the club.

He was apparently a Cranbrook schoolmaster in 1936 - 37 when he formed a team and is said to have bought the field now known as "Jaeger's" for the pitch. They say the team was called The Falcons through a lable inside someone's hat. This photograph among those on display in the clubhouse is of a thirteen man squad plus a referee ( nothing changes!) 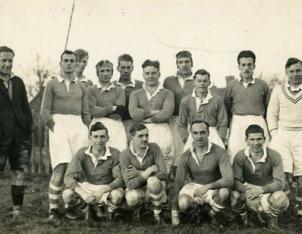 We don't actually know for sure but Bill Jaeger is probably the man in the scrum cap second from the left in the middle row. Look closely in the back row and the other man in a scrum cap bears more than a passing resemblance to the McMinnies youths, Mike and Dave. He's Gordon Pearson,  their uncle who's been able to identify some of the team.

Bill was clearly amazingly enterprising since he was only a young man aged 18 or 19 at the time.  It was the heady days of the thirties - a couple of years from the outbreak of war. When it arrived rugby at Cranbrook went on hold, and tragically it was to cost the club's founder his life.

The facts I've so far researched are that he was a member of the RAF Volunteer Reserve and at the time of his death he was a crew member flying in Mosquito Night Fighters with 96 Squadron. It was 1944 and following D Day in June the squadron had been used to cover the invading forces. Afterwards the Mosquito NFXIII's - equipped with radar -  were used in the efforts to destroy the large number of German V1 flying bombs targeting London and the South East.  The squadron was based locally - at West Malling from November 1943 to June 1944,  and then at an airfield at Ford in Sussex. The squadron was stood down in December. The night fighters had destroyed 27 enemy aircraft and 180 flying bombs. 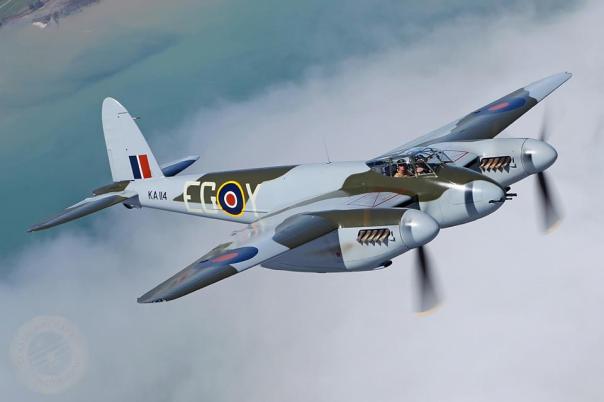 Sadly it came six months too late for Bill Jaeger. On 27th July he was the crew of Mosquito MM468 which had been on Diver Patrol ( an anti V-1 sortie). The aircraft was reported as missing  at 0130 on 26th July.

No trace of  the crew was ever found.

His name is inscribed on the memorial tablet inside Cranbrook Church, and on the RAF Memorial at Runnymede. You can see the details here.

From various accounts it seems the practiced method of bringing down a V1 was to locate it - and dive at maximum speed to fire on it. It was extremely hazardous. Some idea of the perils are included in an account of the war service of  Air Vice Marshall Edward Crew who died this year and was a fellow member of 96 Squadron. We don't know if  MM468 came down as a result of bringing down a bomb, or was hit by fire or whether it was victim to something untoward which caused the plane to crash. 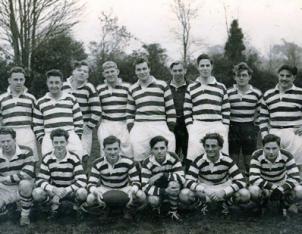 Another man somewhere in the 1936 picture is a player named Wilson. He was also killed in WW2.  It's understood he died the day after winning the Military Cross. The name on the memorial tablet in the church is AC Wilson. I've located details of an Alastair Charles Wilson MC killed in Italy also in 1944. I cannot be sure he's our man but we'll keep checking.

It's intriguing to wonder what they would have made of the club they started if they'd lived. There must have been literally thousands of people who've had fun out of playing and talking rugby at Cranbrook since those early days.

In 1957/58, Cranbrook RFC as we know it today, was formed by a group of Old Cranbrookians who were less than chuffed about having to leg it all the way to Maidstone or Tonbridge for a game. During those initial years, the School was very supportive; the first President was Headmaster C. Russell Scott and the club used School pitches and dressing rooms.

These early days facilities were not of the highest quality, but prepared the players for the rigours of our first pitch and clubhouse on the Tomlin Field, which is still our home today. We moved in at the beginning of 1971 with a clubhouse made from two wartime "pre-fabs" bought at a cost of around £100 each. It is a measure of our progress that we now have four "pre-fabs".

The second XV, the Nomads, were born in 1963/64 and the 3rd XV, initially the Falcons, but later the Gerbils, arrived in 1968/69. Throughout the 1970's, Cranbrook consistently fielded five sides every week, plus an under 19 Colts side. Sadly the last fifteen years have seen, in common with most clubs, a shrinking of numbers.

The introduction of League rugby has, in contrary to many forecasts, promoted some very positive developments. Indeed, the standard of rugby at Cranbrook has never been higher. Nine years ago, when league rugby was first introduced, Cranbrook was placed in Kent III, subsequently we gained promotion through three levels to London SE3. We finished in our highest position in 1997/98, when a highly creditable 4th place was achieved. 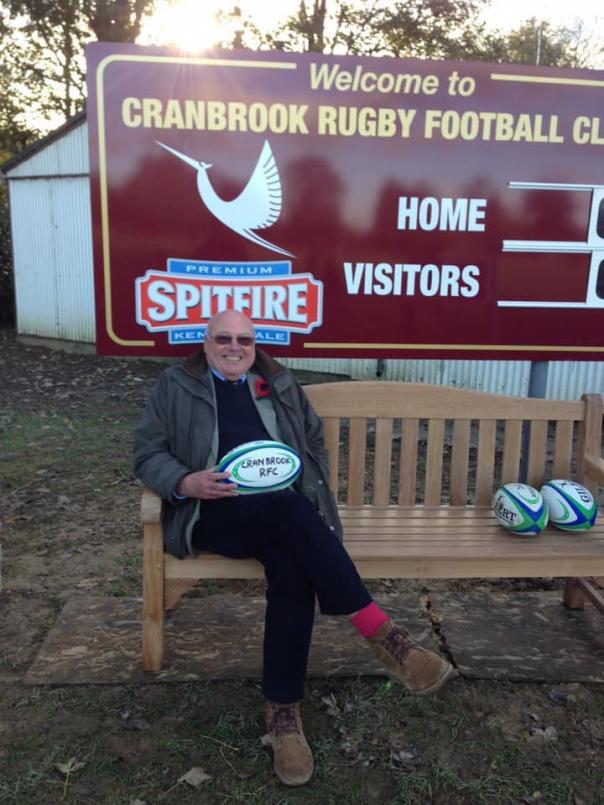 It is with deep regret that Cranbrook Sports Club must announce the passing of our beloved President Mike McMinnies on 2nd May 2019.

Mike was a true gentleman in every sense of the word, a loyal supporter and at all times wise counsel to the Club. Cranbrook Rugby Club was formed in its present form in 1958 following a game between some Old Cranbrookians and the School in 1957 in which Mike and his brother Dave played.

Mike was the first Club Secretary in 1958 and remained on the Committee for most of the following 61 years. Mike became President in the 1980s and was the soul and spirit of the Club. His comments and advice at Committee meetings were invaluable and with his encouragement the Rugby Club became the Sports Club, embracing cricket, netball and American Football. Mike fully supported the decision to improve the facilities at the Tomlin Ground.

Following his retirement Mike gathered his friends together at the Club on Thursdays to ensure the fabric of Clubhouse and Ground was in good order. Mike loved the Club and was there on Saturdays and Sundays to support all sections of the Club; he was very forward looking and thought that the advent of a Ladies team was great news.

How wonderful that Mike attended a Club lunch 26 days before his passing and as usual gave an urbane and witty speech.

Rest in peace, Mike. You will be missed by us all. 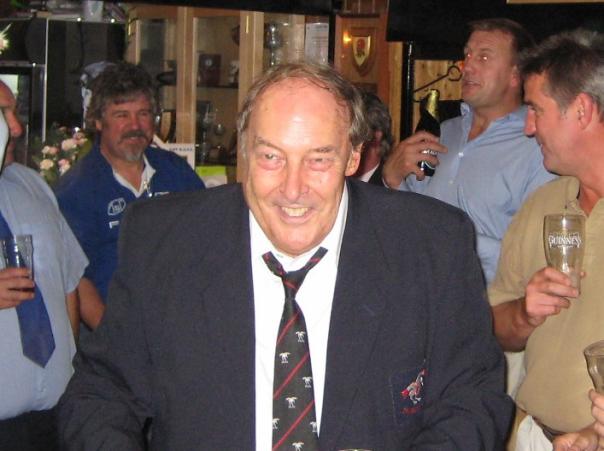 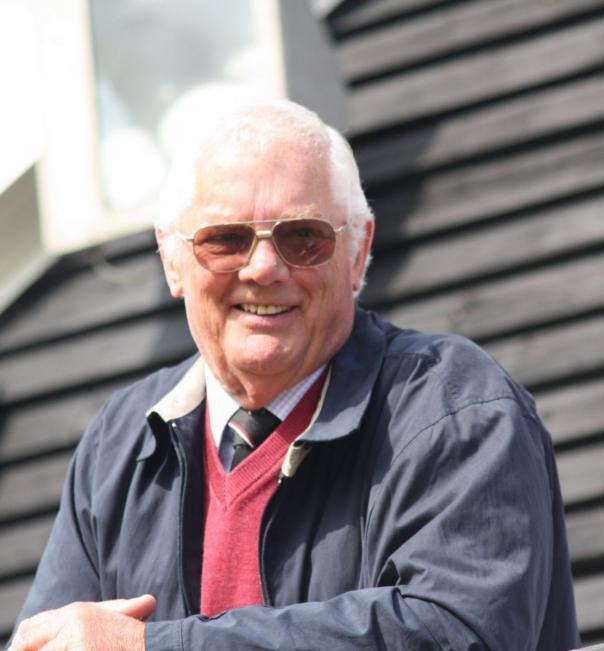 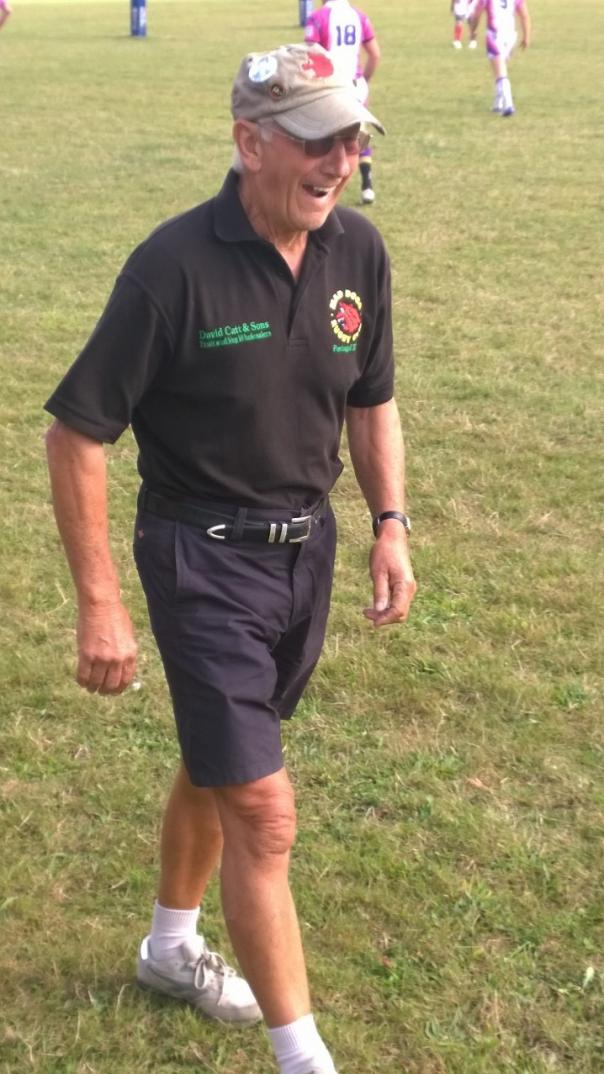